Why Is Reckless Driving Bad In Virginia?

Why Is Reckless Driving Bad In Virginia?

A reckless driving conviction gives you a permanent criminal record. Reckless Driving in Virginia is a Class One Misdemeanor that can carry penalties of up to a year in jail, six months loss of your driver’s license and a $2500 max fine.

Collateral consequences of a misdemeanor include being an insurance risk for employers, increased auto insurance costs, not being eligible to rent a motor vehicle, and not passing security clearances.

Here’s a breakdown of what reckless driving is in Virginia, its consequences, and when and why you should hire an attorney for your case.

What is considered reckless driving in Virginia?

General reckless driving in VA is defined under Virginia Code section 46.2-852 as driving a vehicle on a highway recklessly, or in a manner, or speed, that endangers another person’s property, limb, or life despite the recommended maximum speed limits. And reckless driving can have a high cost.

Within the context of this law, reckless refers to a driver’s disregard for the consequences of their actions and acting indifferently to the safety of another’s property, limb, or life.

Often, drivers are charged with reckless driving after getting into a car accident, and the situation leads the officer to believe the driver is responsible.

Such cases are handled differently, and the solution depends on the judge hearing the case. Factors that can impact the case include your driving record, how many miles per hour you were driving over the speed limit, and whether your car’s speedometer is correctly calibrated.

Reckless driving based on faulty brakes and failure to maintain control

In Virginia, operating vehicles with faulty brakes or drivers that do not maintain control on the highway are guilty of reckless driving.

Other types of reckless driving

What are Virginia reckless driving penalties?

A convicted driver will likely pay higher insurance premiums and will not be eligible to rent motor vehicles. Usually, a conviction will affect security clearances for law enforcement or military personnel. 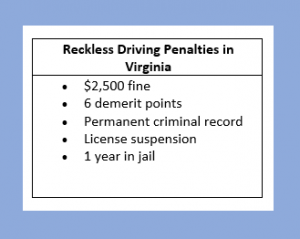 When determining the sentence, the judge will consider prior convictions on the same charge, whether people were injured, your demeanor in court, and your driving record.

If the reckless driving charge was because of racing, you’d face more severe penalties, including 2-year license suspensions and the state will take your car.

Although reckless driving is treated as a class one misdemeanor, you can be brought up with felony charges. If your racing accident caused death, the felony would be treated as a class six felony. Moreover, death cases attract license suspensions between 1 and 3 years and 20 years in jail.

What happens to drivers speeding over 100 mph?

The penalties will be severe if you are pulled over for driving over 100 mph. You might receive maximum penalties under class 1 misdemeanor since most judges rarely accept reasons for driving that far over the limit.

When you get a reckless driving ticket, do you need to go to court?

Since it’s a misdemeanor, drivers charged with reckless driving often have to appear in court for a trial or arraignment. In some situations, an attorney can represent you in court.

In many cases attorneys appear on behalf of the defendant, where the speed, in the eyes of the Court and the Prosecution, are probably not going to result in jail time.

Do the same penalties apply for drivers from out-of-state?

Yes, reckless driving penalties apply to both out-of-state drivers and Virginia drivers. Virginia reports the offense and any demerit points or license suspensions to their home states leaving it to them whether the penalties should apply or not.

Note: Out-of-state drivers can lose their driving privileges in Virginia. If they are caught driving in Virginia with a suspended license, they may attract other charges and get fined and jail time.

Where do officers often look for reckless drivers?

A reckless driving ticket can be given anywhere. However, drivers at the highest risk are those driving on major highways including Dulles Greenway, Dulles Airport Toll Road, interstate I-81, I-66, and 95. This is the reason most out-of-state drivers receive reckless driving charges in Virginia.

Can one appeal a reckless driving conviction in Virginia?

Yes, but the appeal for the conviction should be filed within 10 days of sentencing. Virginia law allows you to appeal general district court findings. Because of this, we recommend having a Virginia attorney experienced in reckless driving cases to represent you during the trial and file the appeal on your behalf.

Can I plead guilty and mail the ticket with the fine payment?

Also, you cannot prepay your reckless driving citations, and you must present yourself in court on the date written on the ticket unless other arrangements are made with your attorney.

How long does a reckless driving conviction remain on the DMV record?

The conviction reflects on your DMV record for 11 years. But if your lawyer manages to reduce the charge, the offense reflects for a shorter time.

How do you reduce a reckless driving ticket?

If an officer charges you with reckless driving, you don’t necessarily get maximum penalties. Possessing a clean driving history, proving the case is more of a speeding case, attending community service and educational courses can reduce charges.

Below are ways to help reduce your reckless driving:

Cooperate with the police officer

How you interact with the officer who pulled you over and charged you with reckless driving is important. If you were cordial and polite, you have a higher chance of working with them in court than if you were uncooperative and rude.

Law enforcement officers are involved in the case after issuing a ticket since they appear for your hearing. Treating them with respect improves your chances of best results.

Attorney Bob Keefer, your Harrisonburg Virginia traffic lawyer, has been handling traffic charges for over 35 years. You need experience on your side if you hope to have your charges reduced at trial.

Provided you don’t have a commercial driver’s license; a Virginia court is allowed to be lenient in your case and allow you to complete community service or participate in a driver improvement clinic.

How soon do I report to jail after conviction?

If you are sentenced to jail after your conviction, the judge might allow you to delay your reporting date up to 3 weeks. However, this varies between courts.

What are the logistics for license suspension in Virginia?

If the court suspends your driving license for less than 30 days, the court clerks will retain your license at their offices. But if the suspension is longer, then you’ll need to pick it up from the Virginia DMV.

While Virginia courts aren’t allowed to keep out-of-state driver’s licenses, they can suspend your driving privilege in Virginia.

How long do I have to pay fines and court costs?

Drivers have 90 days to settle fines and all court costs accrued due to the conviction. The costs are payable at the General District Court, at the clerk’s office or online by credit card. You can pay immediately after the conviction or request the clerk to create a payment plan.

Reckless driving has serious consequences. If you are charged with reckless driving, contact Attorney Bob Keefer and the team at Keefer Law Firm today to review your case and help you obtain the best outcome possible.