Possession of marijuana will now be a criminal offense in Virginia as of the first of July due to Virginia Code § 4.1-1100. The Department of Forensic Science (DFS) is updating its cannabis submission policies in response to these changes. The updated legal changes in Virginia mean that people caught with the drug could face harsher penalties.

The DFS can quantify cannabinoids in food products but can’t determine their THC (tetrahydrocannabinol) concentration. This means that cannabis edibles may contain an unknown amount of THC. The Department has outsourced data to a designated private laboratory, which will create an interim measure system that can analyze and study it. The DFS will inform its stakeholders and customers of the cannabis edibles’ quantitative testing capability changes. This will make way for a better understanding of the product before it is consumed.
Submitting marijuana evidence without other controlled substances follows the same guidelines as submitting it alone, as summarized in the table below. 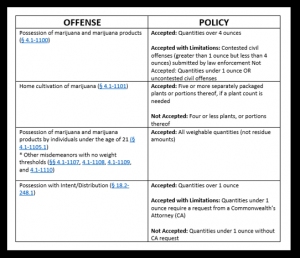 Class 3 misdemeanors are punishable by law and come with a fine of $500, which will help discourage people from illegally possessing cannabis in public. If you are caught with marijuana a second time, you could face up to a half year in jail, if not (or in addition to) a fine of $1,000.

Despite the failure of this amendment during the veto session this past April, Gov. Youngkin remains committed to recriminalizing activities that involve possession of at least two marijuana ounces. Youngkin’s efforts involved amending SB 591.

The proposed legislation to legalize retail marijuana sales in Virginia this September was effectively killed by House General Laws Subcommittee republican members during the General Assembly in 2022.

Cultivation for One’s Own Use

In Virginia, NORML advocated for guidelines that positively impact public safety and responsible consumers rather than recriminalization for personal possession.

Their policies state that possessing cannabis for one’s own use in their residence should not be a punishable offense. This would eliminate several Class Six felonies associated with personal cultivation, such as failure to label plants, preventing them from being seen by the public, or inability to block access by anyone under 21. The policies also point out that people who grow a small amount of cannabis for personal use will only be fined $25.

The new budget language prohibits retail sales of products containing THC ingestible “by inhalation or orally” to people under 21. It also bans the packaging of products to make them resemble other popular brands. This will help to keep products out of the hands of minors and prevent confusion about what is being consumed.

A statement by the Office of the Attorney General and Virginia Department of Agriculture and Consumer Services claims synthetic cannabinoids are now considered adulterants if and when they become a part of food products.

The new legislation signed by Governor Youngkin (SB 671 and HB 933) will take effect on July 1, 2022, eliminating the requirement for a Board of Pharmacy registration. This change simplifies patients’ ability to obtain the medical cannabis they need. The only requirement for patients to purchase cannabis from a medical dispensary in the state is a physician’s written certification.

Patients will be able to self-certify their medical cannabis use. This means they will not need to go through any registered practitioners to get the certification. However, Agents still need to register in order for patients to get their medicine. Those that want a tangible card can still request one from the Board of Pharmacy.

Since its introduction, the program has seen a massive influx of registrants, with more than 50,000 people signing up. Many people are still waiting for approval, with about 8,000 applications yet to be processed.